Let's EMULATE the 480 exemplary members of "The Association of Chinese American Professors and Scientists (ACAPS)," Univ. of Maryland.

Every Chinese-Am who wants to avoid this fate needs to send a letter to Attorney General Lynch to request an independent investigation of the wrongful prosecution of Dr. Sherry Chen, Xianoxing Xi and others. Be sure to copy in Pres. Obama, and your own state's entire congressional delegation. Click here to find their mailing addresses.

Don't labor on the contents of the letter.  There are plenty of eloquent letters and articles already.  See below.  Just cut, paste and put together a letter that suits your group.

(1)  N.Y Times editorial,
(2)  Washington Post Op. Ed article,
(3) letter from a group of 42 Congresspersons,
(4) letter from The U.S. Civil Rights Commission,
(5) letter from the entire Congressional Delegation of Delaware, and
(6) letter from 480 Chinese Am. professors & scientists, U. of MD.

If you are sending a letter from an established group (e.g., ACAPS of MD) all you need to do is state the number of members in your group.  If you are forming an ad hoc group, then you need to list their names, perhaps even include their respective titles but please clarify that titles are used for identification purpose only.

Don't be timid.  Use the holiday parties that you'll be attending to organize!  We can't afford to lose this critical battle.

As soon as YOU decide to organize and send a letter in your locality or state, let me know.  80-20 may be able to help you form a core group in your area, using its membership and donor lists.

DOJ Will Respond or
Face Stronger Actions from Us

If DOJ doesn't respond, 80-20 will take stronger actions.  Examples include the following: demonstrate in front of DOJ in which I'll personally participate. Write Pres. Obama and DNC stating our disappointment with DOJ and that we will count it against the Democrats in the 2016 election.  We may also call for scientists to boycott national security related projects or working in the national labs.  The senators and congresspersons who have written DOJ are already pressing for answers from DOJ.

Go organize YOUR own group NOW!

SALUTE to 480 Exemplary Chinese Ams at U. of MD

Salute to the 480 Role Models!

While Others Spoke Up for Us, Why Are We so Quiet?

They are
(1) N.Y Times,
(2) Washington Post,
(3) a group of 42 Congresspersons,
(4) The U.S. Civil Rights Commission, and
(5) the entire Congressional Delegation of Delaware, including both senators.
In contrast, Chinese-/Asian-Americans (except for 80-20 Initiative and Asian American Congresspersons) have been quiet.  Are we too timid to speak up for ourselves?

Hurrah!  There has been a refreshing beginning.

About 480 members of the Association of Chinese American Professors and Scientists (ACAPS) at University of Maryland voted unanimously to send a reasoned and powerful letter.  Click here to see their letter to Attorney General Lynch requesting an independent investigation of those wrongful prosecutions.

They also showed deep patriotism by stating what could be news to the ignorant bureaucrats in DOJ but is true -- Chinese Americans "account for a large percentage of scientists and engineers across major research universities, national labs, and other research institutions. . . ."

"We are certain that if the current practice of unlawfully targeting of Chinese-American professors and scientists continues, many Chinese- and other Asian-Americans will avoid working in technical areas that are vital to the success of this country's civilian and military industries, which will surely undermine this country's competitiveness in the long run."

80-20 wants to particularly salute Prof. Zhi-Long Chen, a member of 80-20's Board of Donors and a member of the ACAPS, who spearheaded this letter.

Why Have Chinese-/Asian- Ams Been So Quiet?
I have been mystified by our silence.  That past pattern of wrongful prosecutions without subsequent apologies and compensation could happen to any of us.  Don't we want to stop it?  The damaging effect reverberated even after the charges were dropped.  For example, Dr. Sherry Chen's boss still wants to fire her.

Is the long-term damage to America's competitiveness, mentioned by the noble 480 at the Univ. of MD, obvious to all of us as well?  Don't we care about America?

Are we afraid, because the FBI is involved?  Why?  I am not afraid of the FBI at all because I trust the American government.   People who work for FBI are public servants.  If we think that FBI agents can willfully and legally step on our rights, then we have a gross misunderstanding of our government.

Let's Spread the Word & Empower Ourselves

It is true that government can make mistakes. There are always bureaucrats who are over-eager to please the White House at the expense of our laws. If we suspect that they are profiling us racially and by national origin, then we must speak up.  Forward this to your friends so that more of us will speak up for our rights.  Don't be such timid souls.

(1) Understanding what is "political" in the U.S.

In the U.S., taking part in partisan elections is political.  Non-profit organizations are not permitted to engage in it. Otherwise, their non-profit status will be taken away.  Lobbying in the legislative process may, at times, be considered political.

In contrast, taking a position on an issue which involves government or government officials is NOT AT ALL political.  It is just conversations between citizens and the US government.  Even when we have criticized the government or officials wrongly, we are protected by the 1st amendment, freedom of speech, unless we knowingly and maliciously push wrong information.

There are so many AsAms Ph.Ds, professors, Chinese school principals and teachers, heads of professional organizations, and other nonprofit orgs. which don't understand the U.S definition of "political".  They refrained themselves from expressing their view on the apparent profiling of Chinese Ams by the Dept. of Justice because of their misunderstanding.

Instead of being a powerful educated voice for our community to fight for our rights, they silenced themselves because of their ignorance.  That is why "knowing the meaning of political" is the 1st of the 3 EASY WAYS to strengthen ourselves.

(2)  Be less timid.   Think more for our children's future instead of our temporary & small gains and losses.

(3) Understand the importance of elections to us, and make use of them.

Candidates seeking votes are encouraged by US political parties to make promises.  After all, finding out what people want is one important reason to hold elections.  Hence, every election, especially the presidential elections, is AsAms' golden opportunity to chip away at our current UN-equal status.

How to get the promises?  How to get the politicians to fulfill the promises to us after they are elected?  Very complicated.  Best leave it to the professionals, IF we are lucky enough to have such a group who are dedicated to our rightful interests.
In essence, a swing bloc vote is the best inducement to get the promises, because it rewards the candidates most richly or punishes them the most severely. That is what 80-20 has always advocated - a swing bloc vote - in order to induce both major political parties to compete to serve our interests.

Who knows what questions to ask?  Who can deliver a "swing bloc vote"?   Think about it.  Who else but 80-20 has the ability & experience?

Do your friends understand the U.S. definition of "political", and the importance of every election to us who are NOT yet equal citizens?  Why not forward this e-newsletter to them for their comments?

Is Internment Possible?  Think Trump.
NY Times's "Donald Trump Deflects Withering Fire on Muslim Plan" article reported:  "Repudiated across much of the political spectrum but defended on conservative talk radio, Donald J. Trump on Tuesday stood by his call to block all Muslims from entering the United States. He cast it as a temporary move in response to terrorism and
invoked President Franklin D. Roosevelt's authorization of the detention of Japanese  . . . during World War II as precedent."
Is internment still impossible, IF Mr. Trump is elected and IF, God forbid, the US-China relationship turns into a military conflict?
What could be the remedy?
Support 80-20.  It is the ONLY Asian Am. organization that has the clout, the resources and the political knowledge to affect the outcome of the next presidential election through the primary elections in both parties and the general election.

The next Supreme Court decision on College admissions?

The "Fisher vs. Univ. of Texas" was heard by the Supreme Court again yesterday.  80-20's DC chapter, working with Mr. Ed. Blum, Ms. Fisher and Asian American Coalition for Education, turned out in force and spoke out for Asian Americans.
Prof. Chenming Hu, a former 80-20 EF Board Member and "father of 3-D transistors", was there with tens of D.C. chapter members.  Hu spoke.  His picture, shown below, was in USA TODAY in an article "Supreme Court skeptical of racial preferences in university admissions". 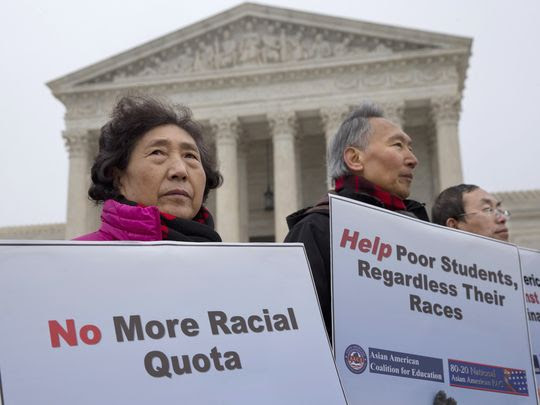 We thank Chenming (the one in the middle), 80-20 D.C. chapter members and all others who helped make AsAm voices heard before the Supreme Court. Additional good news: the last time the Supreme Court heard this case, a few "AsAm" orgs. were there to SUPPORT "racial preference" in college admissions.  This time they didn't show.  Why?  They are disappearing from our community, after 80-20 pointed out their shameful deeds.  Our community rightfully rejected these organizations.
NY Times also has an article, entitled "Supreme Court Justices' Comments Don't Bode Well for ..."   In the first paragraph, it states:
"By the end of the unusually long and tense argument, Justice Kennedy indicated that the Supreme Court might have all the evidence needed to decide the case. That could mean that the Texas admissions plan is in peril and that affirmative action at colleges and universities around the nation may be in trouble as well."
Be Confident In our Own Strengths
People used to say that if the IVY schools believe in "racial preference" in college admissions, then Asian Ams can't do a thing to change it.  Is it really true, if we are under good leadership?
By the same token, we can use the existing presidential primary election system to help select the right presidential candidate, under 80-20's leadership. We can also stop Department of Justice's wrongful prosecutions of us, apparently based on racial and national origin profiling.   Believe in ourselves.
S. B. Woo
President and a volunteer for the past 17 years
80-20 Initiative, Inc.
http://www.80-20initiative.com/index.php and
www.80-20educationalfoundation.org