VICTORIES on many fronts


GOOD NEWS on Many Fronts
(1) On the Supreme Court Front: It UPHOLDS MICHIGAN BAN
on college affirmative action. Implications? The vote was 6 to 2,
with a liberal Justice Steven Breyer voting to uphold the ban.
Is the tide turning?
(2) On the US District & Appeal Courts' fronts:
Mr. Ed. Blum's Project on Fair Representation targets
Harvard, UNC- Chapel Hill, and UW-Madison for "unconstitutional
admissions policy." 80-20 is working with Mr. Blum to find
potential AsAm plaintiffs, particularly for the suit against Harvard.
http://harvardnotfair.org/
Look out! There'll be a front page ad in the World Journal nationwide,
urging AsAm students to step up and speak up. 80-20'll them up. Such
law suits will be filed in the federal District and Circuit Courts. We are
no longer on the defense all the time. Nowadays, we take initiatives.
(3) In the Court of Public Opinion:
(a) Mercury News editorial: "Affirmative action is yesterday's
solution to inequality." Mercury is a liberal paper. Is the dam breaking?
(b) NY Times seeks 80-20's view AGAIN on college admissions.
PLACE:    "Room for Debate," where S. B. Woo participated last year.
TOPIC:    "Is it time to move to income-based affirmative?"
PARTICIPATING FOR 80-20:    Dr. Haibo Huang, an 80-20 Advisor.
He wrote an eloquent statement. To read it & add your comments,
click here .
NOTE the "full court press!" - in all courts of the law, in the court
of public opinion, and in the political arenas in D.C. & CA through
the SCA 4 battle. Are you proud of 80-20's vigorous defense
of your rights?
(4) The MOST IMPORTANT front - the SELF-EMPOWERMENT front!
Thanks to YOU, 80-20 has reached $250,000 in 3 day, meeting
its goal. To verify, click here. One day, when all may abandon
us, we'll STILL have 80-20 that believes in SELF!
Don't relax. SELF must, EACH day, raise an incredible $1,400/yr for
5 years to make its goal of $1,000,000/yr for 5 years by Oct. 21, 2015.
Note that a lump sum of $1,400 per day amounts to $280/yr for 5 years
ONLY. Please commit to donate FOR 5 YEARS. To donate, click here .
Why has the debate on admissions shifted
so QUICKLY in AsAms' favor?
When the victims, i.e. the AsAm students, have lawyers who said that
"we like being victims", then they will remain victims. That was the case
when the so call AsAm "civil rights" orgs (CROs) like OCA & AAJC filed
legal briefs SUPPORTING "race-conscious" college admissions time & again.
Then, 80-20 came onto the scene.
2.5 years ago, 80-20 did a survey and found that 98.2% of AsAms prefer
"race-neutral" admissions. So 80-20 rose to defend you. We fought in
courts. We fought in the court of public opinion. We fought those
AsAm CROs.We also fought in the political arenas in D.C. and in CA
through SCA 5. That helped make a difference.
That is, once the victims, i.e. the AsAm students, clearly stated that
"We OBJECT to being the victims", our nation begins to respond.
Things change.
NOTE: AsAm CROs like Asian Am. Justice Center (AAJC), Organization of
Chinese Americans (OCA), Asian Am. Legal Defense & Education Fund
(AALDEF) continue to pretend that they represent us, and say "Keep on
beating us, we like it." Sigh!!!!
Lessons for All of Us
[A] Money talks. When we let OTHERS' money support OUR "civil
rights" orgs., our CRO may talk on behalf of OTHERS.
[B] Politics is important. When we ignore politics, OTHERS will
pretends to speak for us politically, as OCA & AAJC did and still try.
[C] Must financially support onesâ€™ own political org. Open up
our pocket books.    Otherwise, HISTORY MAY REPEAT!


GREAT News for Us !
NATIONALLY, our effort to defeat race preference in college
admissions is gathering momentum. New Initiative? 80-20 is helping to
recruit plaintiffs - students unfairly reject by Harvard, UNC-Chapel Hill
and UW-Madison - to possibly sue these universities for their race
preference in admissions.
The rights of AsAm children are being vigorously defended.
In CALIFORNIA, 80-20 helped defeat SCA 5* in short orders.
It's a political shocker that led to attentions on 80-20. S. B. Woo
received requests for interview or to speak as a panelist from:
Economist,  LA times,  National Review,  The Nation,
Nat'l Writer's Assoc. (reporters who cover education),
FOX TV,   Channel 26 of SF,    S. CA Public Radio,
Singtao Radio,  SOH Radio  San Francisco Chronicle,
Mercury News,  Sacramento Bees,   Singtao Daily,
California Magazine,  Pasadena Star-News and â€¦, etc.
Our voice is being heard in CA and nationally.
SUMMARY: We are EMPOWERING ourselves! Stopping SCA 5, or
even stopping race preference in admissions nationwide, is not in itself
that significant. In my mind, the following is significant!
The awakening of AsAms to rise and defend ourselves; our
proven ability to hold AsAm elected officials accountable; &
our new ability to induce AsAm "civil rights orgs - financially
supported mostly by non-AsAms - to be accountable to our
rightful interests ARE SIGNIFICANT! For example, OCA has
recently switched from its decades long SUPPORT of "race-
conscious" admissions to ANTI-SCA 5.

*SCA 5 stands for Senate CA Constitutional Amendment 5. It aimed to turn
back the clock and reinstate race preference in college admissions in CA.

A possible lawsuit against Harvard

FORWARD This Important E-newsletter To Your Friends!
There's light at the end of the tunnel to defeat "race-conscious"
admissions NATIONALLY! The Fisher legal team in "Fisher v. Univ.
of Texas" is ready to mount a fierce wave of legal attacks against
the use of race as a factor in admissions.
Has your applications to Harvard, or UNC-Chapel Hill or UW-Madison
been unfairly rejected? If so, then RISE AND ACT! Take action to
force these universities to be fair to you. A great legal team is ready to
fight for you. Please visit one or more of these sites:
http://harvardnotfair.org/
http://uncnotfair.org/
http://uwnotfair.org/
It'll take you at most 1 minute to fill a form to be a potential plaintiff.
Itâ€™ll take you less than 5 minutes to read through one of the 3 IDENTICAL
sites. Best yet, if you are selected as one of the plaintiffs, you'll enjoy
(1) Complete confidentiality, unless you end up participating as a
plaintiff in a legal action against one of these universities;
(2) No cost. The Project of Fair Representation, headed by Edward Blum,
will cover all expenses; and
(3) No public exposure. Mostly likely you'll not be required to appear
or testify in court or talk to the media.
See the FAQ in each site to verify the above 3 points. The lawyers on our
side have greatly refined their approach to win equal opportunity for you.
Step up and be counted. Do a great service for all of us.
If a students does become a plaintiff, the amount of public exposure is
still somewhat subject to one's own choices. If you want to show the
courage of your conviction, you can be like Ms. Abigail Fisher. See
the photo below.
To know more about Mr. Blum, click here. 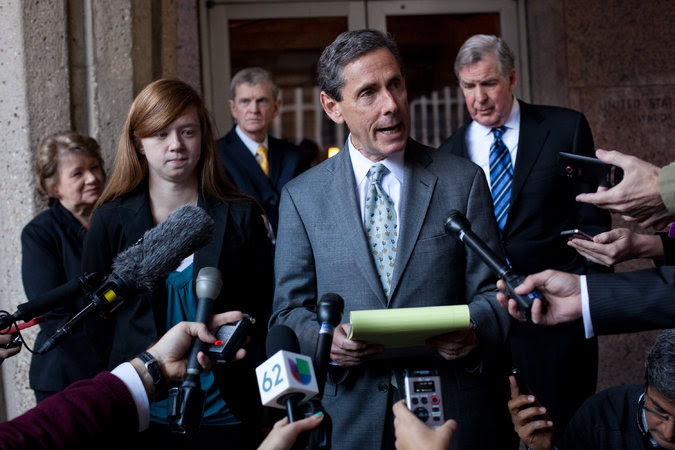 Edward Blum, center, with Abigail Fisher, left, before the national media.
On the homepage of each sites, it asks:
"Were You Denied Admission to Harvard/UNC/UW?
It May be You are the wrong Race."
All sites show youngsters with obvious Asian features. :-) :-)
80-20 is proud to have played a part in a big team effort that leads to
this innovative project, and perhaps to VICTORY!
What did 80-20 do?
a) Filing an amicus brief with the Supreme Court on Fisher's side,
b) causing t 5230 he Fisher legal team to note that emphasizing the blatant
discrimination against AsAm students could be a winner, and
c) helping to defeat SCA 5 in CA quickly, impressing national political
observers that race preference in admissions may be passÃ©.
Your comments are most welcome at EF's Posterboard . Don't forget to
donate to 80-20's SELF project, click here . If SELF fails, 80-20 will likely
close shop after the 2016 election.
Who will fight for you as fearlessly & effectively then?

S. B. Woo, a volunteer
President, 80-20 National Asian Am. Educational Foundation, Inc.
PS: Note simultaneous NATIONAL media on this possible legal challenge:
A Chronicle article by Richard Kahlenberg on Good News for Low-Income Students.
FORWARD This E-newsletter To Your Friends